And one last thing: I nominate SWTOR's worst voice acting....

noncley Member UncommonPosts: 718
May 2016 in Star Wars: The Old Republic
With the advent of the Knights of the Fallen Empire chapter, the acting and narration of SWTOR, which had always been touted by Bioware as one of its great selling features, has become ludicrously amateur and fanfic-ish - and, even worse, they seem to have made some exceptionally bizarre choices in terms of voice-acting and direction.

In that spirit, I would like to nominate Natasha Loring as the *worst* voice-actor not only in the game but in all of video-game history. Check it out for yourself. In a way, it's hilarious. 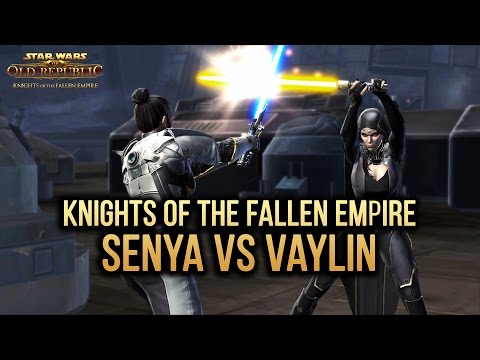 She is trying to play Vaylin, a super-powerful force-sensitive princess, as a kind of psycho-sex-kitten but instead is coming across dead, flat and incredibly downmarket, like a footballer's WAG reading out excerpts from an Argos catalogue while having her nails done. What's so odd is that while her father and her brother both have snarling American accents, her is like a weather girl from Essex. I cannot imagine why she was hired for this job except, if you google her publicity shots, she is very good looking which suggests she might have been hired by a drooling cubicle-restricted BW dev rather than an actual casting director. I hope he got some after all that.

[Note: What makes this more ridiculous is that some of the voice actors on SWTOR, both in its glory days and even now, are excellent: I'm thinking the English actors they got to play the Imperial Agent - Bertie Carvell and Jo Wyatt - and even the actor they have on now to play Valkorian - Darin De Paul - does a pretty good job with the ridiculous 'I'm so evil I'm now good' fanfic storlyline written for him by whatever chump is now writing the english-as-a-foreign language script].