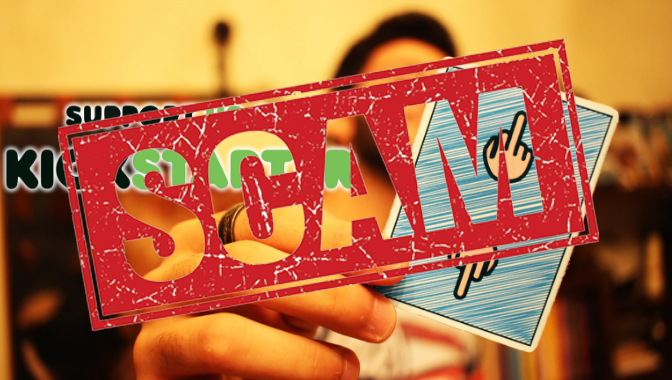 Where to begin? Let's first discuss what is F*ck You Playing Cards?

A project made by Omar and 'friends' (Dennis/Hanson Chien) who helped him get his project on Kickstarter.

"OP: I personally found this project on KICKSCAMMED which is a site for people to write about KS that failed to deliver/scammed backers. It's always a good read... but this one in particular caught my eye."  So obviously it's important to publicly disclose that I'm not a backer of this project, and simply found this story interesting enough to write about it for MMORPG.com.

The below image should get you revved up to read more... The post on KICKSCAMMED is by Dennis Kim himself. 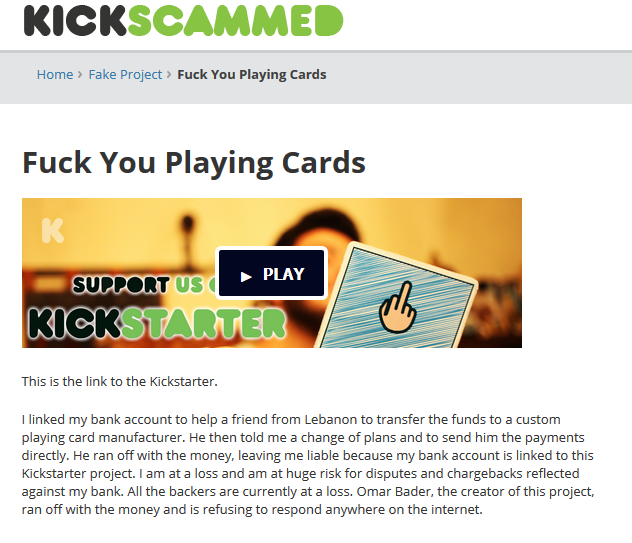 Dennis in the video: "Now in hindsight I understand the stupidity of wanting to help him out. But like I said before he was a good friend, he was supportive, he was hard working, he just wanted to support his next semester of college. And so I'm at a loss, and so all 148 backers are at a loss."

Yikes... but read on! This story has a RARE ending.

This is the story of Dennis Kim... who walked into a scam trap along with the backers after his friend took the money, and ran... what is Dennis suppose to do now!? His bank account is linked to the Kickstarter, and he has direct access to the main account. He cannot sit and do nothing, that's for sure!

What is F*ck You Playing Cards?

F*ck You Deck features a funny custom made back design of the middle finger, with a high quality printing.

So... It's a set of playing cards with a 'interesting' design. Pretty basic stuff.

The main Idea behind the design was to incorporate it with magic to deal with hecklers or as a prank, But i realized that it can be also perfect for Cardistry because of its minimal design, and its scribbled shaped background. 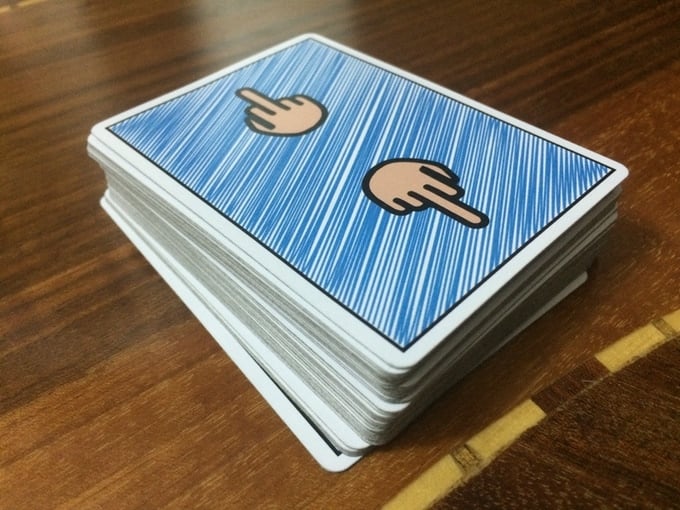 The back design got a minimal look which is perfect for both Magic and Cardistry. It's very funny and stylish! 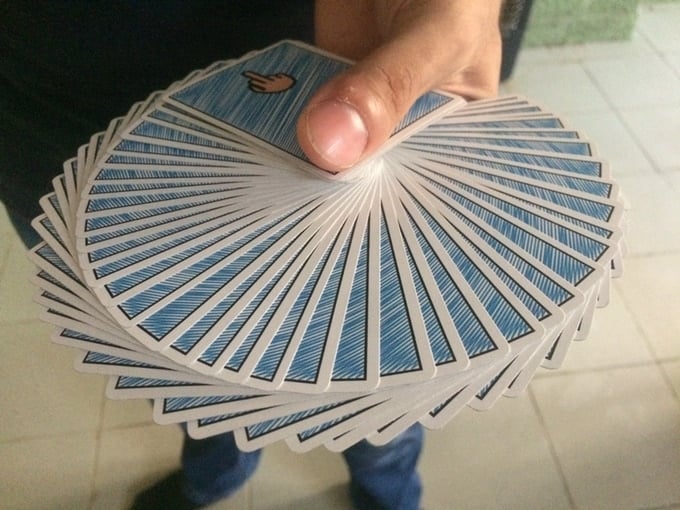 A few months pass landing on January 8th, 2018 with an update informing backers that the prototype for the card was created with some minor setbacks (a promising update) 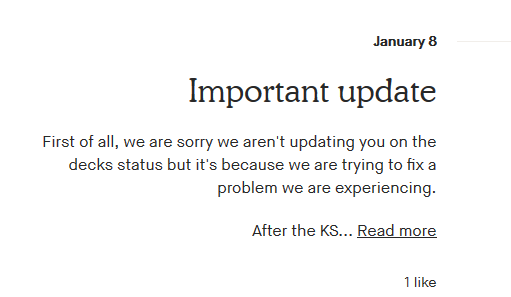 One month later on February 5th, 2018 all hell breaks loose with 3 new 'backer only' updates which the public learns more about in the 4th public post below. 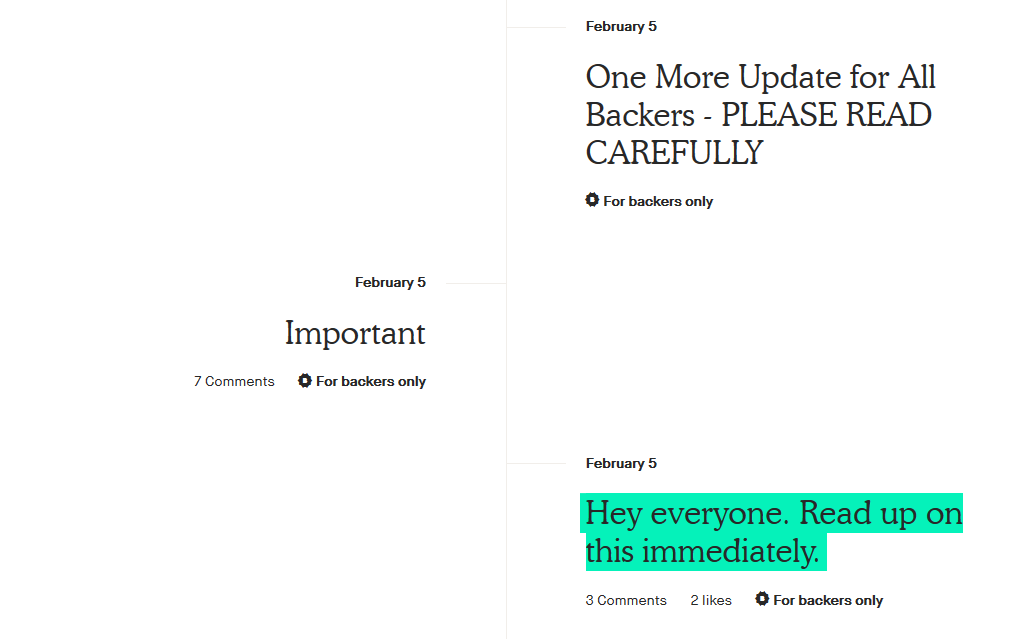 February 7th a public post is made... apparently Omar told Dennis that he refunded $2800 back to backers. 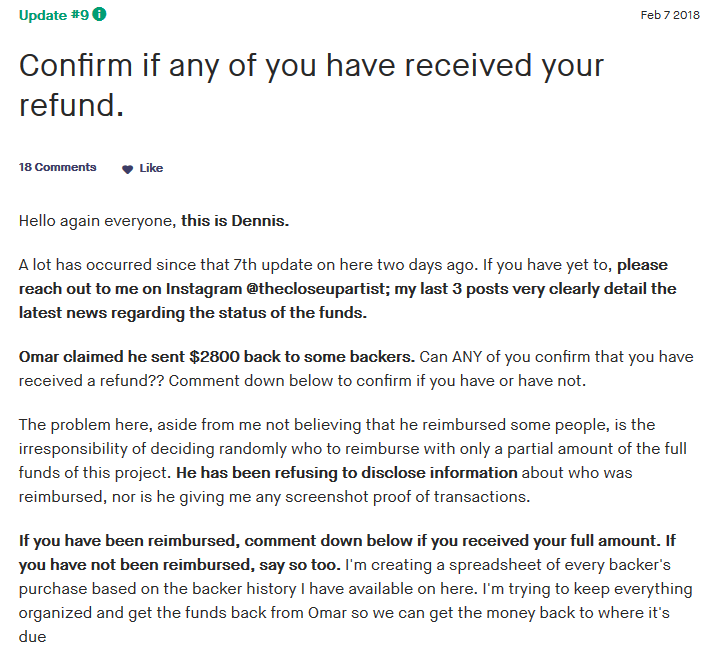 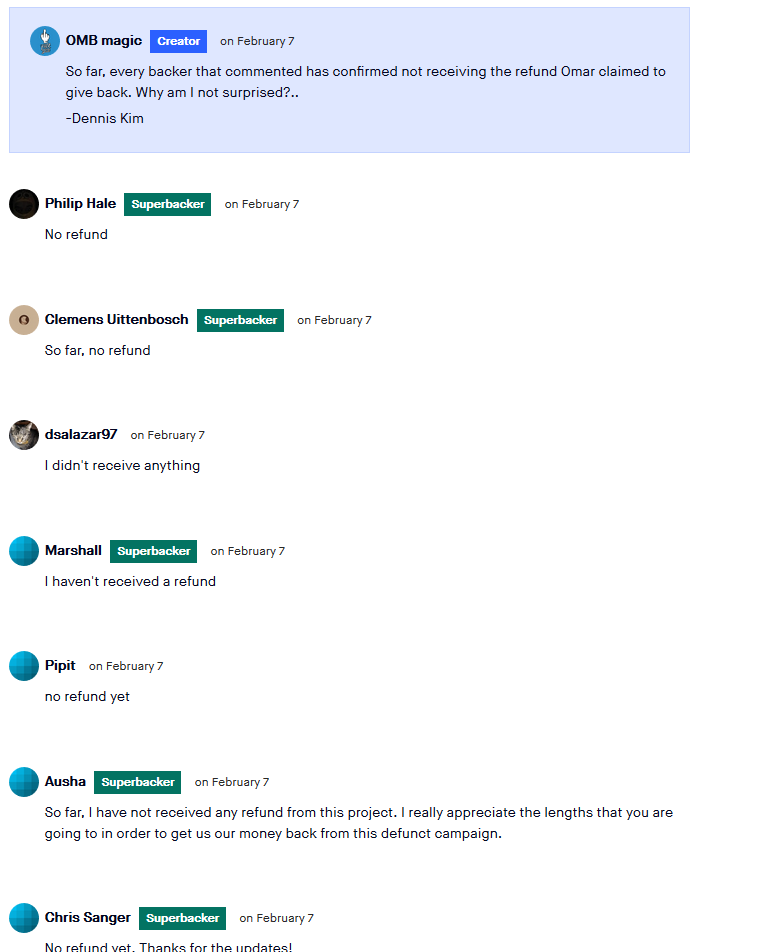 February 13th, 14th, 19th (One week later) another barrage of backer only posts 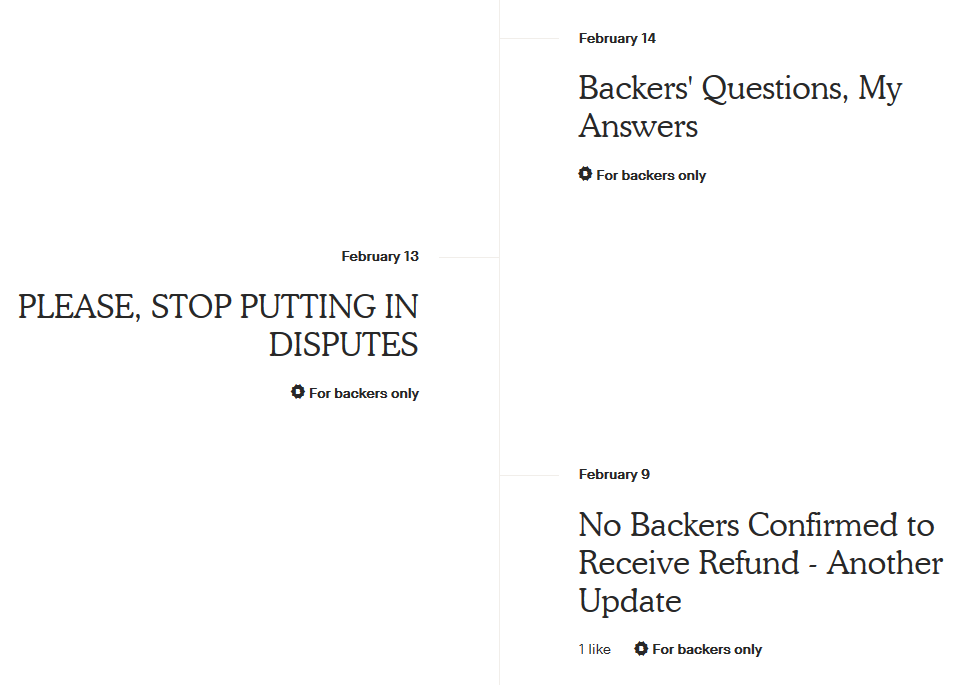 Dennis apparently created the Kickstarter for Omar since he linked his bank account to it. Backers started to put in disputes and Dennis told them to stop since it started to affect him. The above posts may be locked but this public post sheds light on what might be mentioned in the above backer only posts. 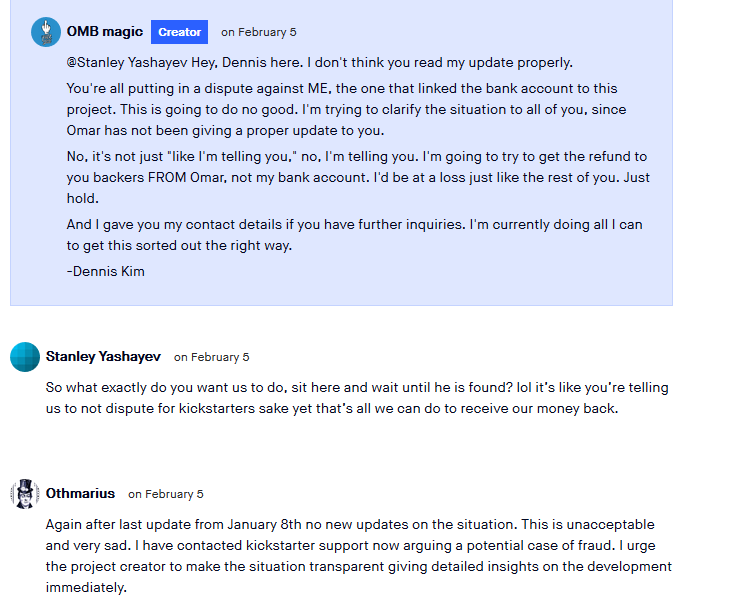 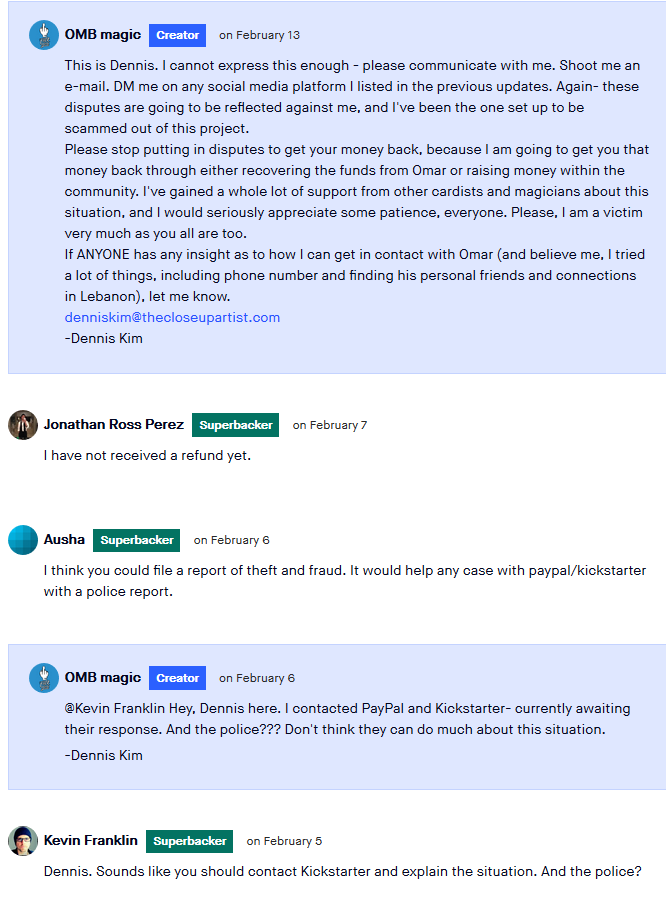 February 20th - A new public post appears which has Dennis listing what he plans to do: TL:DR - He mentions that it may be his final update on Kickstarter because he plans to start a project of his own. Crowdfunding to return the money back to those who were scammed. It also sheds light on what Omar did with the money. 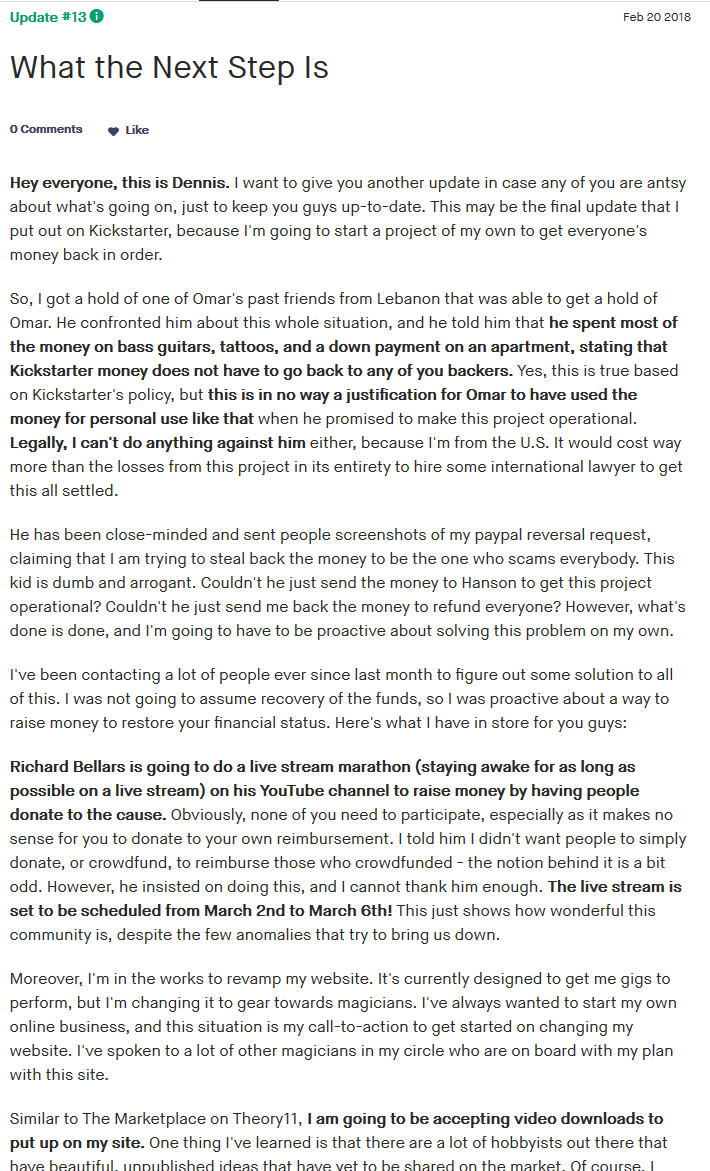 Backers respond to his idea on how to get their money back... 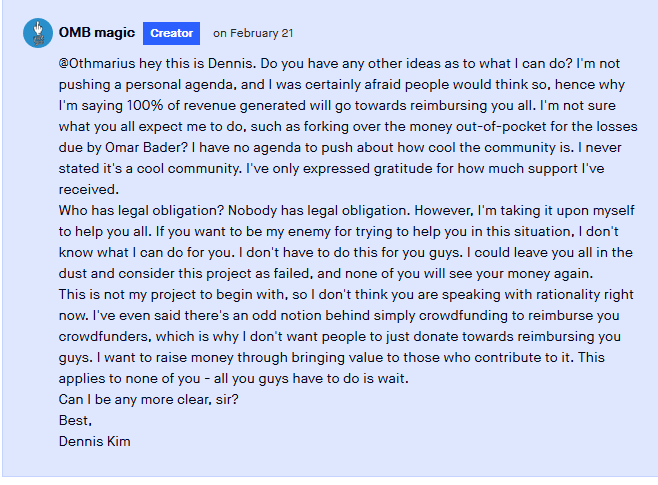 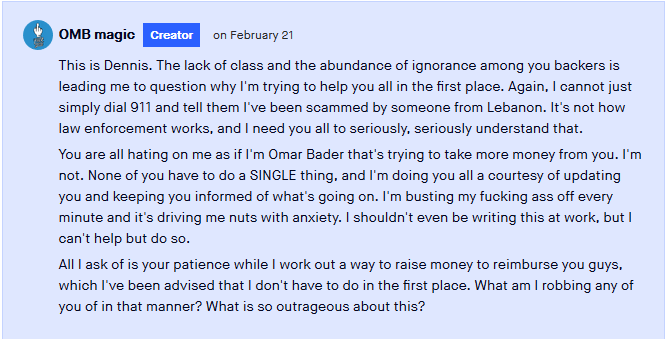 February 21st - another new public post that says the cards are being made. 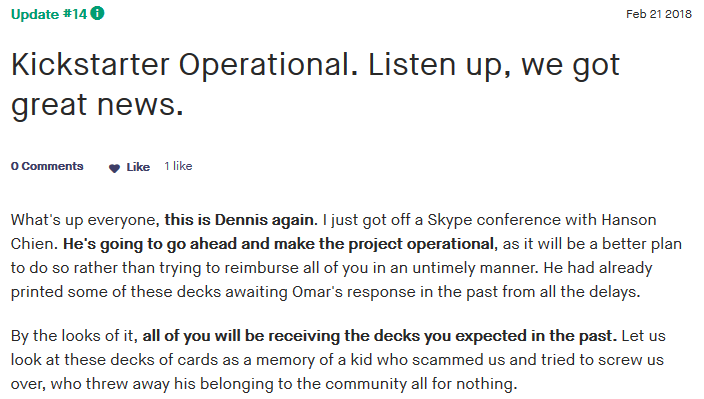 Backers respond positively to this news. 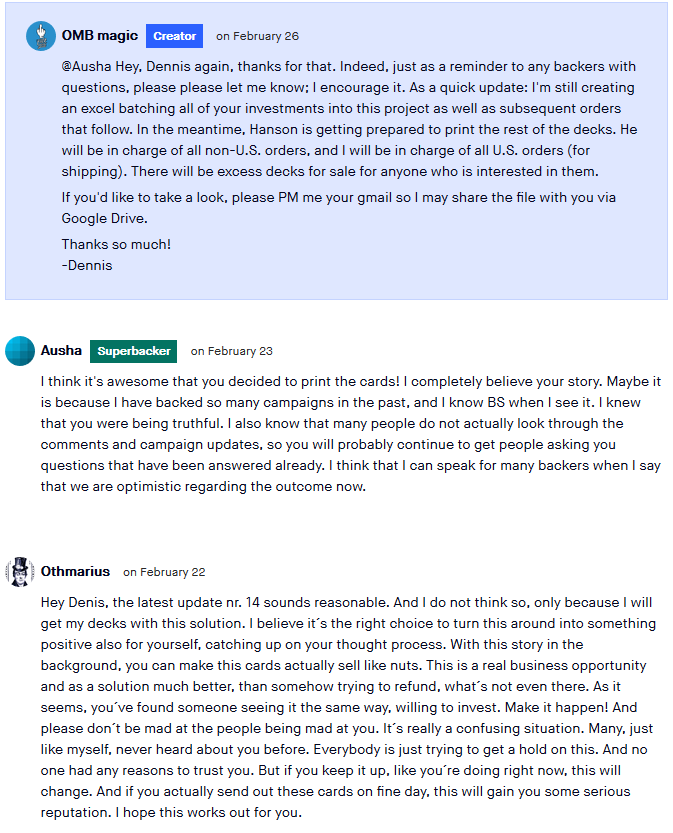 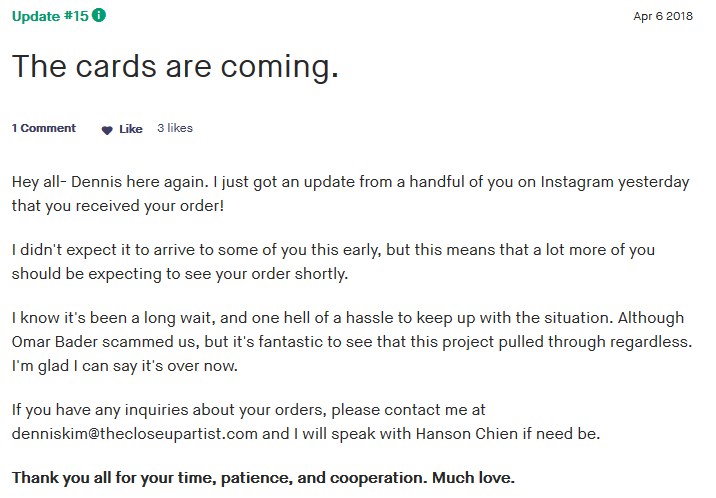 Backers respond with positivity in the public comments section 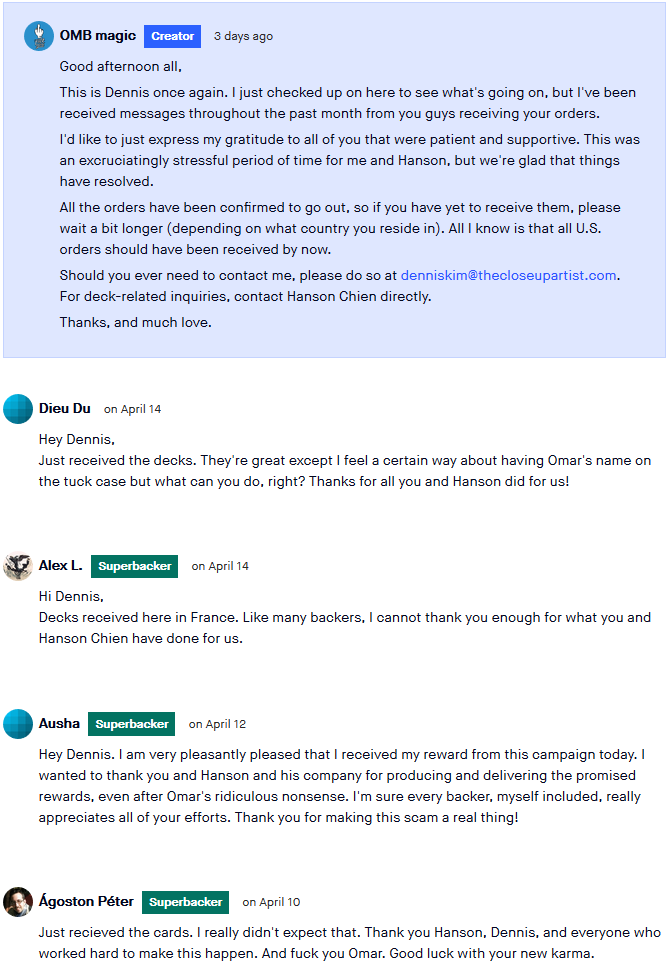 The Kickstarter page was updated with a new image and information 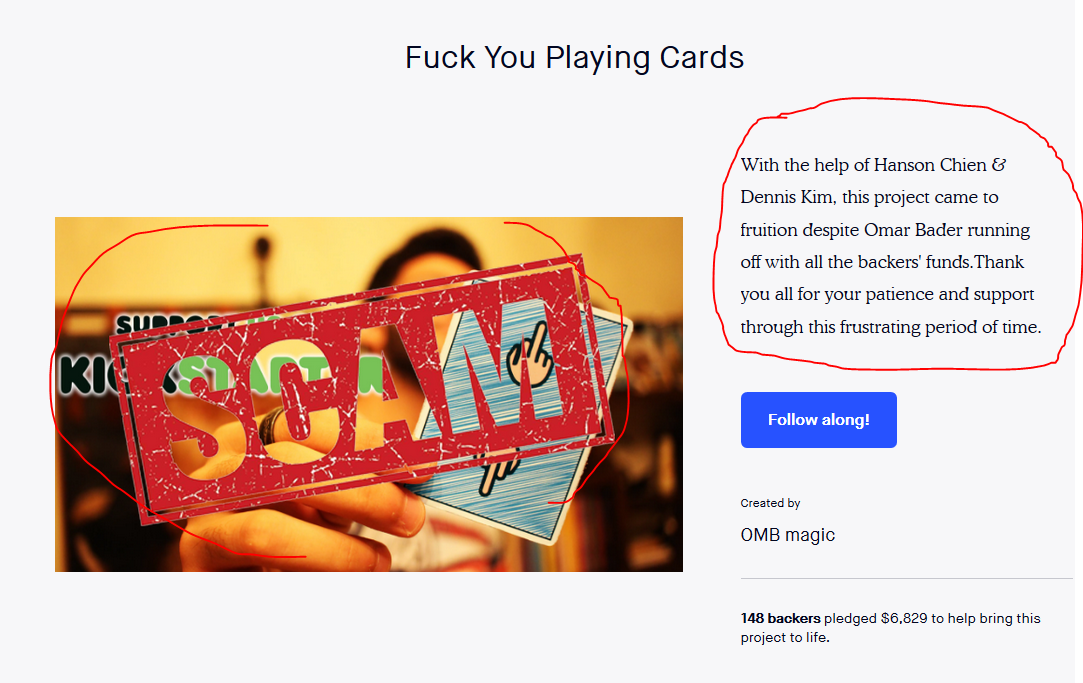 So there you have it! Dennis Kim walked into a scam trap along with the backers; and while he probably took a hit from his own pocket. The backers got the cards they pledged for! All thanks to Dennis's efforts to turn this negative experience around. Dennis (In my opinion) deserves kudo's for his efforts; and also deserves to have his story heard (which is why I took the time to post the events here on MMORPG.com)

Dennis Kim handled this entire 'stressful' situation that he fell into with grace and earned himself a new follower in the process.

Dennis Kim is an aspiring Magician and you can check out Dennis Kim's website at: 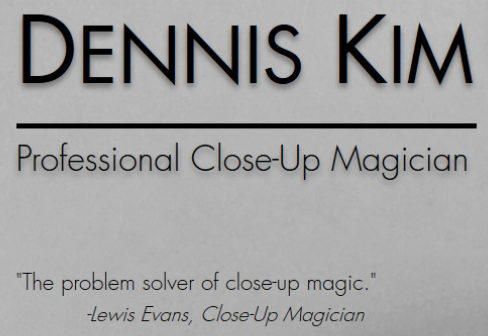 YouTube of Dennis showing some of his magician tricks:
https://www.youtube.com/user/DennisKmagic/