Yaevindusk Member RarePosts: 2,094
May 2017 in Final Fantasy XIV
With less than 30 days left until the early access period if one pre-orders the expansion, and 34 days until release, FFXIV has released a new video with the full themesong of Stormblood titled "Revolutions". 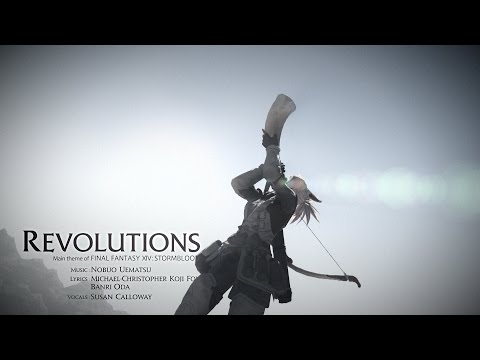 Note:  It has scenes from 3.56 and the Expansion, though I personally didn't see any real spoilers after watching it other than seeing a few new characters; there was one thing that people will notice if they played, but it's too out of context if not.  Though if you want to avoid even minor things, then simply tab the video while listening.

Due to frequent travel in my youth, English isn't something I consider my primary language (and thus I obtained quirky ways of writing).  German and French were always easier for me despite my family being U.S. citizens for over a century.  Spanish I learned as a requirement in school, Japanese and Korean I acquired for my youthful desire of anime and gaming (and also work now).  I only debate in English to help me work with it (and limit things).  In addition, I'm not smart enough to remain fluent in everything and typically need exposure to get in the groove of things again if I haven't heard it in a while.  If you understand Mandarin, I know a little, but it has actually been a challenge and could use some help.
Also, I thoroughly enjoy debates and have accounts on over a dozen sites for this.  If you wish to engage in such, please put effort in a post and provide sources -- I will then do the same with what I already wrote (if I didn't) as well as with my responses to your own.  Expanding my information on a subject makes my stance either change or strengthen the next time I speak of it or write a thesis.  Allow me to thank you sincerely for your time.