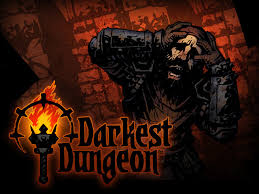 Website: Darkest Dungeon: Terror and Madness in the Cavernous Depths

Uncompromising, unforgiving, and unconventional, we present a fresh take on the dungeon crawler that elevates the importance of sound tactics and a character's mental state over their gear.

You will recruit, train, and lead a team of flawed heroes through twisted forests, forgotten warrens, ruined crypts and beyond. You'll battle not only unimaginable foes, but stress, famine, disease, and the ever-encroaching dark. Uncover strange mysteries, and pit the heroes against an array of fearsome monsters with an innovative strategic turn-based combat system.

You will have to tend to characters’ spirits as much as you do to their Hit Points. But in these grim situations, you'll find opportunities for true heroism!

Darkest Dungeon is not a game where every hero wins the day with shiny armor and a smile. It is a game about hard trade-offs, nearly certain demise, and heroic reversals.

Do you have what it takes to survive in the forgotten corners of the Darkest Dungeon?

Looks like a dungeon-crawler roguelike-like oregan-trail type of game. Some good trailers and already blitzed it's goal.