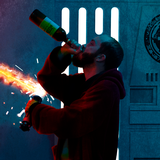 Ok so I've been trying to find the right game for me.  I've given up on MMOs for now because there just isn't any that are entertaining right now.  However, I have decided that I would like to make my own game.  I realize that it's not as simple as just saying it.  I've attempted to build my own game numerous times.  Even got Gigs of tutorials on multiple different game engines.  But, it all buckles down to two problems.  I don't know programming languages and the engines just don't seem that user friendly.  I mean why do I have to go through this round about way of importing models, and then figuring out how to texture them properly.  They really need to streamline that process and basicly simplify it for dummies.  Hell, what I would give for a game engine that just allows me to fly around the world dragging and dropping assets into the world.  I mean really we should have that by now.

Anyway, until that day comes, I'm looking for all the games out there that have online and allow you to build in them.

But, they're just not doing it for me.  I basically just want to be able to jump in, maybe even on my own server, create really cool places to explore and let people come and explore it.  Any help would be greatly appreciated.