Pantheon: Rise of the Fallen Alpha One Breakdown

Nanfoodle Member LegendaryPosts: 9,446
June 14 in Pantheon: Rise of the Fallen
I took a break from this site but I am back now. Seems lots of people may have missed this update due to me maybe not posting time stamps. So I am going back in time to give you the update in full. 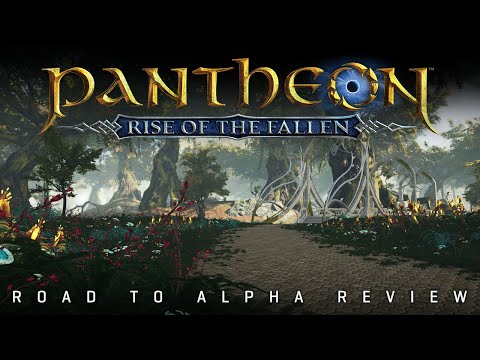 0:30 Starts talking about the news letter they put on on the same topic, Alpha road map. Steps, features, road map and what they are currently working on, to get to Alpha 1. This stream will have more detail.

1:30 Talks about their 30hr Pre-Alpha session for 8000 VIP members. Longest test they have done as of yet.

4:20 Joppa talks about why goals for classes first. Wants the unique class experience to shine in Alpha. Fullest expression of what it means to play Pantheon and let people have the option of the style of play they like. Every player ability they add, opens the door for deeper game play with NPC abilities.

6:15 Monk is next class to be released. We see some animations of the Monk. (we may see Monk next live stream in July, that was from the June update) Gets into what some of the class abilities, Monks will have allot of charged abilities. (Gap closers)

8:07 Talks about Ranger and Summoner. (Next two classes being worked on)

8:53 Gets into pets they will be working on for the Summoners (2nd on the class list) This is needed for Charm ability, also helps with NPC skill kit, also works with Ranger beckoning systems (taming pets in the wild)

11:32 Pet system tying into NPC combat awareness/AI. (June stream was all about this topic)

15:14 Next priority, URP and Networking and why its important. Will be a few months that this will be focused on completely but they will also be developing the game at the same time, just not the main focus.

17:34 Guild functionality being worked on as well. Social game would be the biggest factor without having to say so.

18:10 Perception and crafting/gathering System was next, Joppa talks in length about why its important to finish this system for Alpha 1. Joppa calls these systems secondary types of game play. Does not want to see these systems held back till late in the process, so they tie into the entire game and get the attention to be tested fully. Wants the impressions of crating from the testers to be positive when they talk about the game (outside of NDA) Realizes even under the NDA people talk if these systems are fun or balance well with the rest of the game. (Feb stream talks allot about crafting)

22:14 Acclamation System is next up, (Weather System) The focus is to make the system to improve the experience. Feedback tells them this needs to be a focus. Are the Pre-Alpha testers not enjoying this system? Its described as clunky and cumbersome. Also add more climates.

24:15 Now Atmospheres are called Fractures. Gets into how they are different then Acclamation.  Atmospheres is natural weather systems. Fractures are supernatural events. Still seemed convoluted to me.

27:38 Climbing next on the list, its mostly done. They want to make some changes, like remove it from endurance and making a new resource called Grip. Endurance was tied into combat as well. Also add climbing to a skill system. (You are now skill 93 for Climbing)

33:11 Loadouts are next. So you can change action sets quickly depending on what you will face next. Its a quality of life thing. Its out of combat only. Wizard can swap to a fire or cold spell loadout/skills. Lowers downtime.

34:46 Swimming returns. Goes in depth on why summing will be different in Pantheon.

38:11 LFG systems, its coming but they wont discuss it now.

38:47 Factions was next up, already up and running. On the list because they want to expand it. Will have a larger deeper role when they finish it for Alpha 1.

39:29 On Boarding. (how you bring a new player into the game) How do you teach how players the Pantheon systems?

43:05 Audio is next subject. Joppa audio nerd talks for a while on why its important.

46:00 Content. Talks about the change of Faerthale project from a level 1-50 crammed into one area to now a more natural level 1-30 area and shows that off with an in game map. This will be done as a phased approach, adding 1-30 then 31-40 and lastly 41-50 with zones and content to match as Alpha phases progresses.

52:28 level speeds will not be fully worked out till beta.

53:20 Investors is an active thing but cant disclose information for many reasons. There is some cool stuff happening on that front.

53:50 Races will all have different starting stats.

54:30 When URP conversion gets done, you will start to see allot of the grey boxing be replaced with real assets and textures.

57:25 Things they could or may out sourced for Pantheon development.