As the topic says, EVE can use more roleplayers so we've begun reaching out various roleplaying sites around the internet to try and attract more of us.

EVE is a Massively Multiplayer Online Game (MMORPG) that takes place approximately 20.000 years after our times in a galaxy on the far end of the universe. When you join EVE you assume the role of a freshly graduated "capsuleer“, a relatively small group of elite spaceship pilots capable of controlling powerful spaceships on their own from within their capsules. Capsuleers are often referred to as "immortals" due to the fact that the highly advanced capsules, which connect them to their ships, are capable of instantly downloading their consciousness to a clone of themselves in the case of physical destruction.

A few things make EVE special amongst other MMORPGs

Set more than 21,000 years in the future, the background story of Eve Online explains that humanity, having used up most of Earth's resources through centuries of explosive population growth, began colonizing the rest of the Milky Way.

In turn, this expansion also led to competition and fighting over available resources as it did on Earth, but everything changed with the discovery of a natural wormhole leading to an unexplored galaxy named "New Eden". Dozens of colonies were founded, and a structure was built to stabilize the wormhole that bridged the intergalactic colonies with the rest of human civilization, a giant gateway bearing the name "EVE".

However, when the natural wormhole unexpectedly collapsed, it destroyed the gate. Cut off from the rest of humanity and supplies from Earth, the colonies of New Eden were left starved and disconnected from one another; some died out entirely.

Over the millennia the descendants of the colonists managed to survive and rebuild their own societies, but the memories and knowledge of humanity's origins as well as their own from Earth and the Milky Way became lost.

Five major distinct societies rose to prominence from the colonies, each growing into interstellar spaceflight-capable civilizations. The states based around these colonies make up the five major factions in Eve Online: the Amarr Empire, the Caldari State, the Gallente Federation, the Minmatar Republic and the Jove Directorate.

The Amarr, a militantly theocratic empire, was the first of the playable races to rediscover faster-than-light travel. Armed with this new technology and the strength of their faith in their god, the Amarr expanded their empire by conquering and enslaving several races, including the Minmatar race, who had only just begun colonizing other planets. Generations later, after the intense culture shock of encountering the Gallente Federation, and in the wake of a disastrous attempted invasion of Jovian space, many Minmatar took the opportunity to rebel and successfully overthrew their enslavers, forming their own government. However, much of their population remain enslaved by the Amarr, and some, having adopted the Amarrian religion and sided with their masters during the revolution, were released from bondage and incorporated into the Empire as commoners in the Ammatar Mandate. The free Minmatar Republic, taking as inspiration the ideals and practices of the Gallente Federation, is presently a strong military and economic power actively seeking the emancipation of their brethren and all other slaves.

The Gallente and the Caldari homeworlds are situated in the same star system. The Gallente homeworld was originally settled by descendants of the French colonists of Tau Ceti; Caldari Prime on the other hand was purchased by a multinational megacorporation that began to terraform it. The terraforming of Caldari Prime was incomplete at the time of the wormhole's collapse, however, and the planet remained environmentally inhospitable for millennia. The Gallente restored themselves to a high-functioning technological society some hundred years before the Caldari, building the first lastingly democratic republic of the new era in the form of the Gallente Federation. Originally the Caldari were members of the Federation, though cultural animosity between the two peoples spiralled into a war during which the Caldari seceded from the Federation to found their own Caldari State. The war lasted 93 years, with neither nation able to overwhelm the other. The planet Caldari Prime was initially retained by the Gallente Federation during the war, and did not become part of the new Caldari State. Much more recently, however, a Caldari offensive managed to recapture their lost homeworld, a fact which is viewed with abhorrence by the Gallente, who see the presence of a significant Caldari fleet about the planet as a mass hostage taking.

Both the Gallente Federation and Caldari State are economical and trade oriented nations. However, the Gallente favour liberal economic policies, encourage individual entrepreneurship and social democracy, and maintain a progressive approach to social welfare whereas the Caldari State is organised as a form of statist corporatocracy, where the State itself is owned by and operated on behalf of a few trust-like megaconglomerates. Due to their official policies regarding multiculturalism and encouragement for diversity, the Gallente Federation attracts many immigrants; a third of all ethnic Minmatars reside as citizens there, and thus while the Caldari State originally existed at a relative population deficit, this was rectified instead by a State-wide programme of artificial reproduction, producing a generation of so-called 'Tube Children' raised by the State to enlarge the available labour pools of the controlling megacorporations.

The Jovians (currently a non-playable race) were colonists, too. Unlike the other races of Eve Online, they maintained a relatively high-functioning technological society after the collapse of the wormhole and did not need to spend millennia recapitulating ancient societal developments, and while the other four major races were still grounded, Jovian history saw two major periods of empire. They expanded outward and eventually turned to genetic engineering in order to mold themselves into a species more suited for deep-space life and long-range interstellar exploration. Genetic experimentation, however, eventually led to the deadly "Jovian Disease", an inheritable psychological disorder which, despite their best efforts to reverse it, crippled their civilization. They now inhabit a region of space supposedly inaccessible to outsiders.

In addition to different backgrounds and histories, each of the races have characteristic philosophies of starship design. Minmatar ships tend to be quite fast but fragile, and rely on their high speed maneuverability to evade the tracking systems of heavier weapons, while themselves using projectile weapons such as artillery or autocannons, more sophisticated kin to today's munitions technology. Amarr ships are ponderous, densely armored, and pack batteries of powerful laser-based energy weaponry. Gallente ships are sleek, well designed and armored, and specialise in deploying fleets of robotic drones while mounting hybrid weapons that operate using superconducting magnets to accelerate mass toward targets at extreme speeds. Finally, Caldari ships are typically poorly armored and not particularly fast but utilise powerful energy shields, and make extensive use of torpedo/missile launchers and hybrid railguns, favouring engagement at extreme ranges.

The Eve Chronicles: (A large collection of stories explaining many different aspects of the EVE Universe) 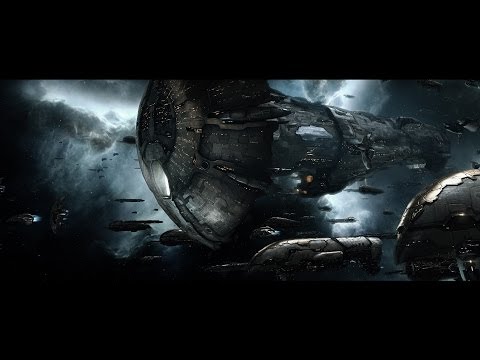 Hope to see you guys in space soon