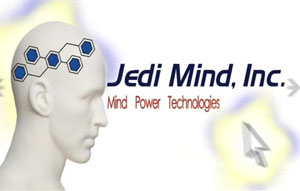 The defendant is Jedi Mind, Inc., which touts a wireless headset that detects brainwaves on both a conscious and non-conscious level and can even make it possible for users to play games or run software applications with thoughts alone.

The technology calls to mind the famous "Jedi Mind trick" as featured in the "Star Wars" films. According to Wikipedia's hilariously dry description, the mind trick refers to a "spectrum of force powers which influenced the thoughts of sentient creatures, most commonly used to coerce into agreement by suggestion through voice manipulation, or to cause one to reveal information. This allowed its practitioners to resolve matters in a non-violent way."

The mind trick doesn't, though, appear to have worked on Lucas. His LucasFilm production company sent a cease-and-desist letter to Jedi Mind in May 2009. A week later, Jedi Mind's chief, Brent Fouch, offered to phase his company out of Jedi Mind marks. LucasFilm accepted the offer, but now claims the company did no such thing.

The studio says the alleged trademark infringement will cause confusion in the marketplace and harm its business and reputation. LucasFilm is seeking injunctive relief and recovery of damages estimated at no less than $5 million.

Note to all potential clone armies: LucasFilm holds trademarks on Jedi Knight, Jedi Power Battles and Jedi Training Academy, but not directly on Jedi Mind and other affiliated marks. Nevertheless, it claims dominion over "all characteristics associated with the Jedi knights not memorialized in a registered trademark ... (including) Jedi robes, the lightsaber weapon, the power to levitate objects, a telepathic oneness with other Jedi and the universe, and the ability to shoot energy beams called 'Force Lightning' from the fingertips."

Video At Link Demo of device in use.