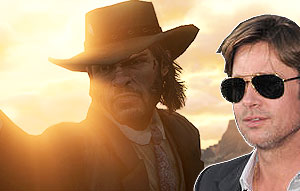 But who’d have thought a star of the caliber of Brad Pitt would be linked to the role of Redemption’s star, likable (albeit a bit grizzled) family man John Marston?

Yup, according to ShowbizSpy, Pitt has been given first refusal on Marston’s role. If the movie follows the plot of the game, it’d see PItt embarking on a sweeping hunt for atonement (not to mention his captured wife and son) across the embryonic American West.

An unnamed source told the blog: “The idea is to make this in the style of an epic Western movie but with a few modern touches...Brad is perfect for the role.”

Don’t get too excited at the prospect, though. Although efforts have been made to turn many popular video games into movies, including Halo, Bioshock, and even Pac-Man and comparatively few have got as far as filming, fewer still have been competed -- and approximately none of them have been any good. Maybe Pitt’s star power (and strong pedigree) will help this one turn out differently.