As a result of the decoding of intercepted messages, it was determined that something was to occur at 17:00 MA time on Wednesday, August 18th. The coordinates deciphered were 864122, 83488, 127 which is between Minopolis and Fort Pandora.

I don't think I've ever seen so many ubers gathered in one place before, and of course, they brought their Vehicles. Perhaps for a fast getaway? Nah ... ubers don't run!

All of the big societies were represented, including a lot of well-known Entropians. Approximately 200-300 people (maybe more) were gathered waiting patiently for something to happen.

DJ Stave was covering the event on Atlas Haven Radio, and Community Manager Hanne Gulbrandsen arrived as well, but seemed more annoyed that Stave was playing Queen on the radio than being bothered much with the bots.

There was action of course, starting with little Spider Bombers acting like ankle biters, but they got taken down fast, and then the bigger mobs appeared, like Drone Coordinators, Defenders, Warrior Elites, Warrior Exterminators and Warrior Commanders. 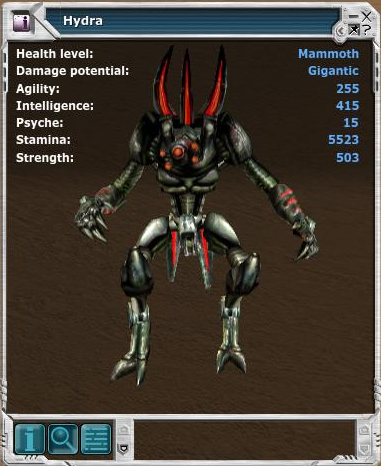 He was tall and intimidating, but that didn't last long. As he moved towards the crowd, Art of War took aim, and shortly thereafter, if was all over but the golden swirlies. Art of War collected a 144 PED Global, but no information is available at this time as to what the loot contained. Afterwards it was told, that the loot contained: Chronicle Shins M, Tiger feet F and an A106.

Entropian Electra Lightning said: "Hydra looked like an angry lego man with a lighter" ... I could not have described Hydra any better myself.

Community Manager Hanne Gulbrandsen said: "What can I say ... is this the end? What purpose did this serve for the robots? Hmmm ..."

People became frustrated to see that nothing else was going to happen, so they kept asking Hanne if this was it.

Finally, after several minutes, Hanne replied: "It looks like it is indeed the end! For now ..." - and then logged off.

Indeed, the question stands - was this another step for humanity, or do the robots have yet another evil plan in store for Entropians. What was the real purpose for this attack? Could it be that they were testing our strengths and weaknesses?

I guess we will have to wait and see ...