Would you ever play an educational game?

Assuming you’re no longer a pre-teen, and consequently are no longer enthralled by the learn-to-read adventures of Billy the Naughty Monkey and pals, we’re guessing the answer is "no."

But if you’ve ever fantasized about stepping out onto the stark, gray surface of the Moon, a new, free release from NASA could well rekindle your interest. Moonbase Alpha takes place 15 years in the future, in and around a manned lunar base. Players are tasked with restoring power and life-support to the facility after a meteor strike, and along the way they’ll discover a new enthusiasm for science, technology, engineering, and mathematics. 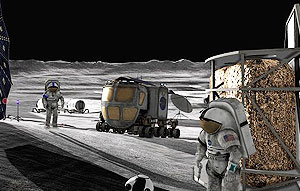 Fly me to the moon.

That’s the plan, anyway -- and according to one critic at Gamezebo, Moonbase Alpha “does what it sets out to do very convincing...it might just inspire the next generation of astronauts.” NASA’s long-term plan is to develop a massively multiplayer online world, of which Moonbase Alpha’s adventure will be but a part.

And just as its players are stepping in the dusty footsteps of intrepid moon explorers of past decades, Moonbase Alpha is also walking a trail that’s been proven already. Government-funded 2002 release America’s Army, originally conceived as a recruitment and public-relations tool, became one of the most popular online shooters of its day -- no doubt helped by the fact that, like Moonbase Alpha, it was (and remains) completely free. It promised to teach players “army values,” military tactics, and the function of some of the advanced technology currently in use in the field.

Licensing the popular, high-tech Unreal 3D engine, America’s Army not only looked as good as its competitors, it played just as well, too. It’s still running (indeed, the latest version, America’s Army 3, released last year and is available for free on Steam) and you’ll even see it touring the country as an interactive exhibit at various state fairs, air shows, and other shindigs.

“We fully expected to have a successful game,” he told us, citing input from Special Forces personnel and the quality of the game’s tech and development team as contributing factors.

According to a study conducted at West Point, 30 per cent of candidates have played America’s Army, and it’s reached over 11 million players in its eight-year lifetime. And even once enlisted, some soldiers don’t give up the game, Barnett told us -- active-duty military players are recognized with an in-game tag that lets players know they’re playing with the genuine article.

Currently, there’s no way to tell which Moonbase Alpha players are actually on the Moon -- and considering nobody’s been there in nearly three decades, we doubt the feature is high on NASA’s priority list. But if NASA’s long-term plans for the game come to fruition, perhaps it’s only a matter of time.